Drones for Security and Risk Management 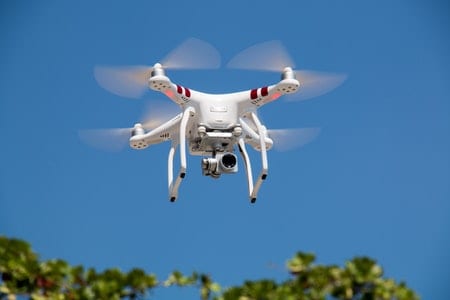 Drones have become increasingly useful for companies looking to boost their security and risk management efforts. Their capabilities often allow security professionals to maintain a required level of security while reducing operational costs and risk. We’ll look at why companies from most industries can utilize these technological innovations for security, but first, we’ll take a look at what exactly a drone is.

What is a Drone?

A drone, also referred to as an unmanned aerial vehicle (UAV), is an aircraft without a pilot on board that can be controlled remotely. For the purpose of this blog, we’ll be referring to the small, portable drones and not the larger aircraft used by the military. If you’re curious about military drone use, you may recall recently a US surveillance drone was shot down by Iran, causing tensions to escalate. This is a good example of military use of drones for security purposes in monitoring potential threats.

However, most frequently, you’ll see drones flown in recreation at a local beach or park. These recreational drones can be equipped with the same functionality you would want for business use, but often just operate as a remote control device to fly around. To use a drone for commercial purposes, you’ll need to be licensed by the Federal Aviation Administration.

A drone is typically very lightweight and doesn’t consist of too many parts in its basic form, but can be upgraded based on your needs. Without getting into too much detail, they operate through the use of a power source, generally battery or fuel-powered, which enables the rotors and propellers to turn and give the drone lift.  A control device is used to communicate with the drone using radio waves (like cellphones and laptops), allowing you to remotely operate it.

Drones that have a navigation system such as GPS can relay their exact location to you. Some of the features included in drones that can make them valuable for security are cameras, voice recorders, and live video feeds. As drones are being developed, they are becoming smaller and with more efficient power supplies, consistently increasing value to your team.  Read more on drones here.

Drones are still a relatively new technology and so their use is still developing, but what we’ve seen is really impressive. Functionally, your security team can equip thermal sensors to their drone and monitor the perimeter with heat signature detection capability. Biosensors allow your drone to monitor various things such as radiation leaks, water pollution, or air quality. They perform well in poor weather, allowing your drones to be outside when conditions make it difficult for humans to see clearly. It’s a particularly attractive solution when considering jobs that require you to be in dangerous or dirty environments. There are a lot of unique uses.

The most apparent use is for ongoing perimeter control. You can effectively reduce the staff needed to physically patrol a large area and send out a drone instead. Drones can also assist you in security assessments, utilizing drones for data collection to quickly examine a facility and take photos of necessary areas. For security, drones also offer an advantage over fixed cameras, which often lead to blind spots in your surveillance. If you’re thinking outside of the box, you can even incorporate drones into your organization’s emergency communication plans!

Who Is Using Drones?

Drones are fascinating because they are extremely multifaceted. They are used for weather monitoring, photography, agriculture, border patrol, searching for missing persons, and even delivery, just to name a few functions. If you watch the morning news, there’s a good chance a drone was used to give you that great aerial view of the traffic build-up. Farmers can use them to monitor their fields efficiently while energy companies can use them to protect critical infrastructure. Construction companies can even use the drone’s 360-degree image capturing to generate 3D models of buildings.

Why Aren’t There More?

In everyday use through public spaces, privacy issues remain a large concern for the use of drones with mounted cameras. Safety also becomes a concern with the possibility of 10 – 40 pound drone falling from the sky. Although these are unlikely, they offer new risks to companies that have to be addressed. Within private commercial use, companies are hesitant to invest in drones with limited flight length and payload capacity. Sending a drone up to inspect a bridge or monitor a large perimeter, for example, can become troublesome if the battery doesn’t last long and requires frequent battery changes. Like most pieces of technology, there are those that want to get involved right away, and others that prefer to wait until a better, updated version is released.

Do you already have a drone to help monitor physical security? Perhaps you’re looking into how one would work within your organization? Take a free trial of SecureWatch and see how drone usage can fit into your security assessments and risk management process.